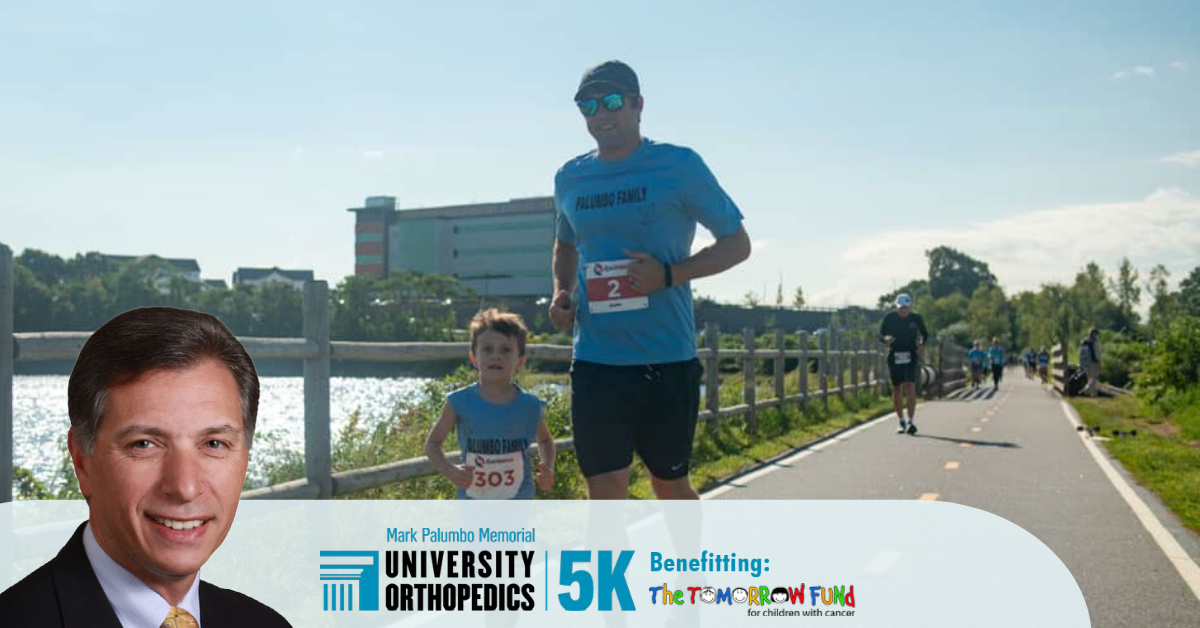 EAST PROVIDENCE, R.I. — Get ready to lace up those sneakers again to support both the brave children battling cancer at Hasbro Children’s Hospital and the steadfast family members by their side.

The 3rd annual running of the Mark Palumbo Memorial University Orthopedics 5K is set to step off Sunday, September 18, 2022, at 9 a.m. Open to walkers and runners alike, the race will take place on the picturesque East Bay Bike Path, near University Orthopedics’ Kettle Point location. The 5K will once again raise money for The Tomorrow Fund, a non-profit organization that provides financial and emotional support for children being treated for cancer at Hasbro Children’s Hospital, as well as their families. The 2021 race raised $40,000 for the charity.

“The goal of The Tomorrow Fund is to make a frightening and traumatic experience a little less daunting for all members of the family,” said Lisa Abbenante, Executive Director of The Tomorrow Fund. “We provide vital support for children with cancer and their families – from parking fees to housing and travel assistance. Having a fundraiser of this magnitude really makes a tremendous amount of difference in ensuring our programs continue in a forward motion.”

The event is named in honor of Dr. Mark Palumbo, a renowned spine surgeon who passed away in September 2019. He was not only a beloved member of the University Orthopedics family, he was a highly regarded pillar of the community. The Palumbo family has supported The Tomorrow Fund and held active roles with the Providence, RI-based charity for many years.

“There’s not a day that goes by that we don’t think of Dr. Palumbo and everything he contributed, not only to University Orthopedics but also the entire community,” said University Orthopedics President Dr. Edward Akelman. “We’re honored we’re able to play a small role in helping the Palumbo family carry on his legacy of philanthropy.”

Anne Palumbo, Dr. Palumbo’s wife is taking an active role in planning this year’s event along with her daughter, Kristen, and son, Mark Jr.

“We were humbled and awestruck by the outpouring of support last year’s event received. My family looks forward to once again working with our UOI family to make the 2022 5K even better,” Anne said. “I know Mark would be proud of all that we’ve accomplished in his name.”

The Mark Palumbo Memorial University Orthopedics 5K will start at University Orthopedics’ picturesque Kettle Point campus in East Providence, then turn onto Veteran’s Memorial Parkway, head down Squantum Road, and onto the East Bay Bike Path. From there, the race heads north on the bike path with beautiful waterside views of the Providence skyline, before turning back onto Veteran’s Memorial and heading south for a finish on the Kettle Point campus where runners will be provided with water and fruit.

Gray Matter Marketing is handling race day operations. Registration is currently open with early bird pricing available through August 31. There will be no on-site registration on race day. The event – which is expected to sell out quickly – is open to all levels of runners and walkers and will feature a waved start. Competitive runners are asked to join the first wave, while walkers and joggers using strollers are asked to start in the final wave to allow for less congestion on the course. Pets are not permitted on the course. For more information on the event, as well as information on how to sponsor The Mark Palumbo Memorial University Orthopedics 5K, visit  www.universityorthopedics.com/5K.