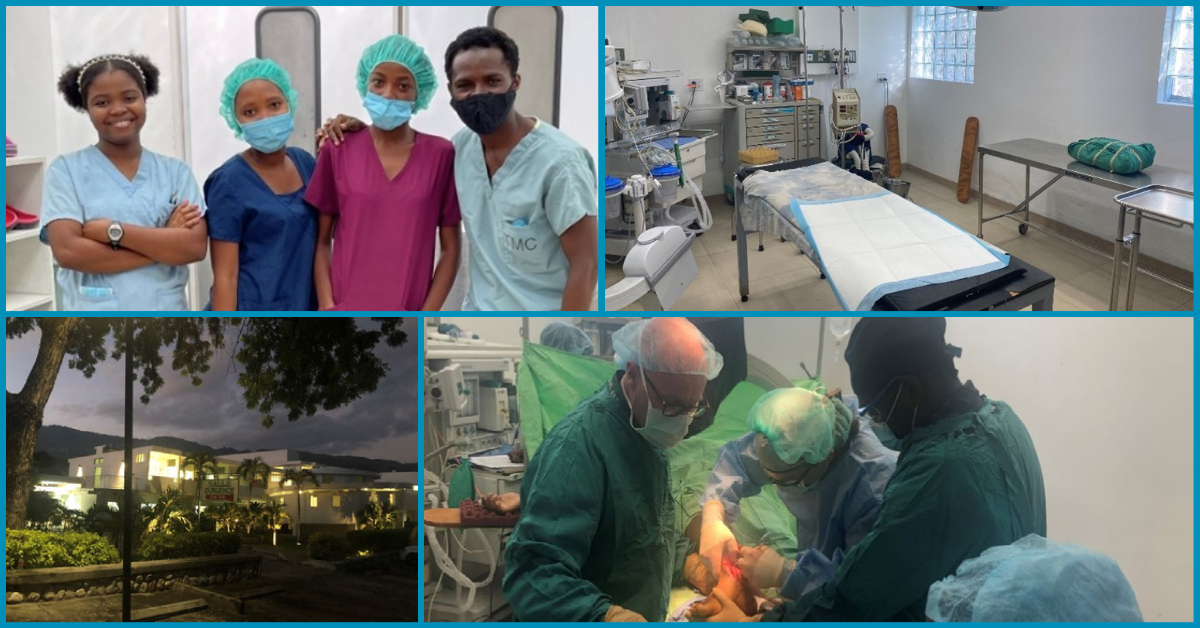 Dr. Roman Hayda, chief of University Orthopedics’ Division of Orthopedic Trauma, traveled to Haiti in September shortly after an earthquake and then a tropical storm hit the island nation. While there, he provided medical help to injured people. He recently described his experience.

I was invited to go to Haiti and traveled on 11-18 September on a disaster-relief and humanitarian mission. This last-minute mission would not have been possible without the support of many who juggled schedules, cross-covered patients, and made the many adjustments necessary for me to go on short notice.

The southwestern peninsula of Haiti was hit with a magnitude 7.2 earthquake on Saturday, August 14, 2021. Although initial reports were of low double-digit casualty rates, the numbers quickly escalated as local authorities and non-governmental organizations were able to assess the scale of damage in the remote areas. Ten days later tropical storm Grace hit the island with over 5 inches of rain. Currently, USAID estimates more than 2,000 deaths and 12,000 patients with injuries related to the earthquake. These are compelling reasons to provide help; however, any relief effort would have to consider the intrinsically poor infrastructure, the unclear political situation from the president’s assassination one month prior, as well as the risk of COVID.

The chief surgeon at Adventist Hospital in Port Au Prince, Scott Nelson, had been working non-stop since the earthquake, opening the hospital doors to all earthquake victims. As it happens he had strong ties to UOI surgeons and Phil McClure, our former resident and trauma fellow. Dr. Nelson asked Dr. McClure who had worked there as a fellow, to form a team. I was invited to join this team and had about a week to make the necessary arrangements.

I arrived on a muggy Saturday afternoon to the gated hospital compound. The eye-opening 1.5-hour drive to cover the short distance from the airport showed the difficult conditions Haitians live under – streets with huge potholes, ramshackle shacks for homes that are stacked up the hills, and little evidence of any amenities such as running water or electricity. In one particular section, Martissant, the driver noticeably sped up not because there were few pedestrians and little vehicular traffic, but as he explained, this area was being fought over by rival gangs and we were not to linger.

After a brief tour of the hospital, the team went to work the same day. The hospital consisted of two floors, a small emergency room, and three operating rooms. It ran on its own generator and had its own water supply, as the supply grid is not reliable. Interestingly, there was no elevator, rather a spiral ramp so as not to rely on electricity. The hospital wards were overfull, with about 60-70 patients, and with all available bed space occupied. The majority were earthquake victims, but other trauma patients from traffic accidents and major falls also had found their way to the Adventist Hospital. 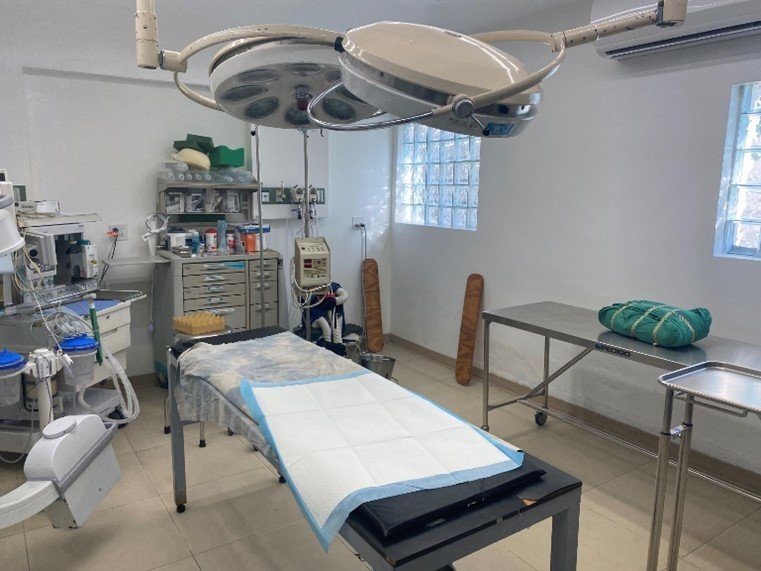 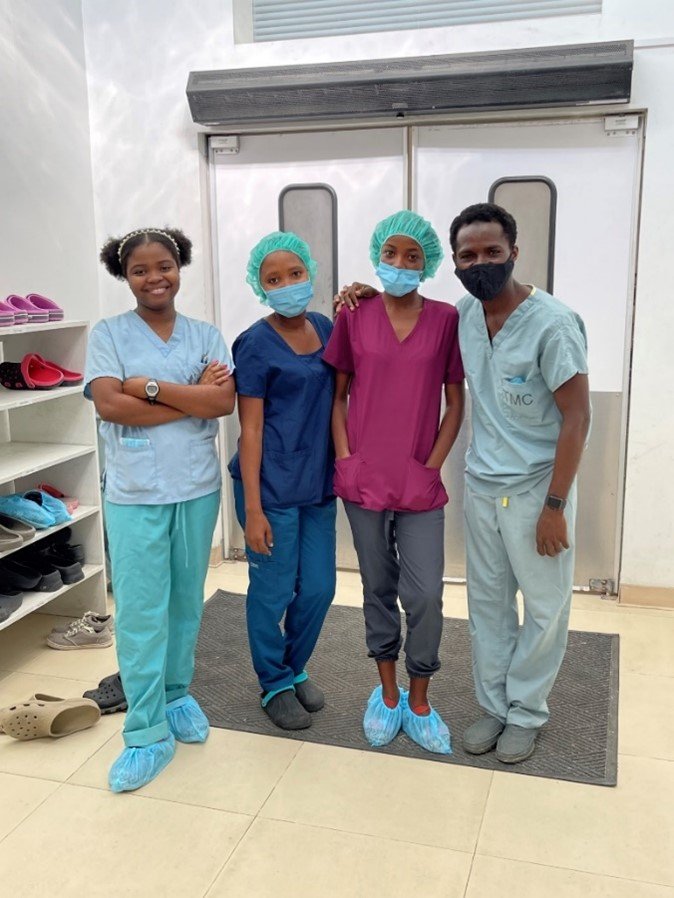 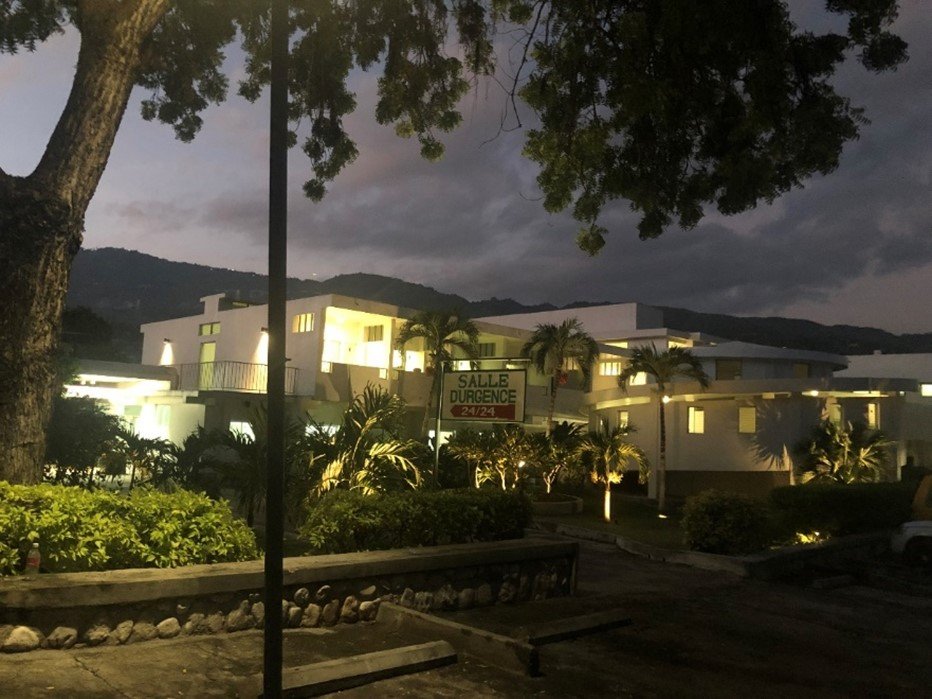 Our team performed about 25-30 cases that week. The most common was cleaning contaminated, infected, open fractures. For some of these, we applied external fixators and deformed the limb to allow the wounds and fractures to heal. These will be subsequently straightened by adjustments to the frame.  In the US, these would typically have been covered with a flap or amputated. The resources for complex wound coverage or amputation prostheses are not available in Haiti and so those procedures are avoided. Routine fractures were made more challenging by the delay to presentation numbered in weeks not days, very limited blood transfusion, lack of CT scans, and limited equipment.  Each case required individual consideration to balance the potential benefits of fixation versus the risk of infection and other complications. Under this principle, we had to decline to operate on a 19-year-old woman with a significant bilateral pelvic fracture that resulted from the earthquake four weeks prior, and a 24-year-old man with a subtrochanteric femur fracture that was healing, albeit in a very shortened position.  Both of these would have benefited from fixation of their fractures in more normal circumstances. Making these decisions was very stressful but necessary.  Fortunately, we were able to fix other fractures of the acetabulum, femur, tibia, elbow, and forearm, giving some patients a good chance at a full recovery.

The patients and their families were incredibly grateful for the help we provided.  The ongoing support of the Adventist Hospital will provide a structure for the critical follow-up and therapy necessary to allow these patients to recover. As far as our team was concerned, we learned a lot from each other, not just technical surgical tips for working in under-resourced conditions but figuring out what really are the essentials of the care we provide. We were all incredibly impressed with the resourcefulness, dedication, and positive attitudes of the Haitian staff in the hospital under these incredibly difficult conditions. The patients and their families are likewise completely engaged in their care and guided by their trust in their providers and their will to heal. I will forever remember the smiles and hugs from the patients and their families knowing that we gave them a better chance of recovery. Although there is more that could be done, even what little we were able to provide will have a positive impact.

Dr. Hayda, Chief of Orthopaedic Trauma at Rhode Island Hospital and Brown University Department of Orthopaedic Surgery is devoted to providing state of the art orthopaedic trauma care. His areas of expertise include the evaluation and treatment of fractures and other injuries of the extremities and pelvis. Fractures around joints, particularly those of the knee, elbow, ankle, hip are of special interest. In addition to these acute injuries, he treats post traumatic conditions such as nonunion of fractures, infected fractures, malunions, and arthritis. When possible, minimally invasive techniques of fixation using plates, rods, or screws are used. He also has significant experience in using circular fixators and other techniques to regenerate bone. The goal is to restore the highest level of function possible for each patient.